Third time is the charm.  Our first attempt at leaving the Cayman Islands North Sound area was squashed due to weather.  Then we saw a window for Isla Mujeres, Mexico and left early one morning.  When we entered North Sound back in February it was shallow over the reef but we had no problems.   We set our chart plotter to record our track in so we could follow it upon leaving.  Despite following the track we grounded out three times and hit our rudder.  We anchored and Gary dove under the boat but facing a two night offshore passage we headed back to the marina, hauled the boat out to check for rudder damage (none just a nick), rechecked back in with customs and immigration sigh…..

Finally a week later we got a long enough weather window to make the four day passage from Grand Cayman to Key West.  Based on a recommendation from the marina, we hired a pilot boat to lead us out of North Sound.  The appointed time of 6:00 am on Sunday rolled around and the pilot is a no show.  No surprise there.  Always up for a challenge and having no desire to go back to customs and immigration where we were now on a first name basis, we threw off the dock lines and headed out.  Staying exactly and I mean exactly on our track and right at high tide, we made it over the reef with no problems.  The difference?  The water was much rougher and we were a few hours from high tide the first time around.  Ahhh finally out of the Caymans and heading back out on the water!

We had hoped to use the easterly trade winds to help get us to the west coast of Cuba, but as luck would have it the winds were dead calm with the exception of Sunday night when for 12 hours they were right on our nose.  The calm conditions returned Monday morning right when we needed them the most for the Yucatan Channel and heading east in the Florida Strait.   We enjoyed a good sail into Key West riding the Gulf Stream.  In fact, if Gary hadn’t realized just how much the gulf stream was pushing us east when we wanted to go north east, we would have overshot Key West and ended up in Miami instead 🙂

Not long after leaving Grand Cayman this little guy joined us in the cockpit for a much needed rest.  Look at those calm seas. 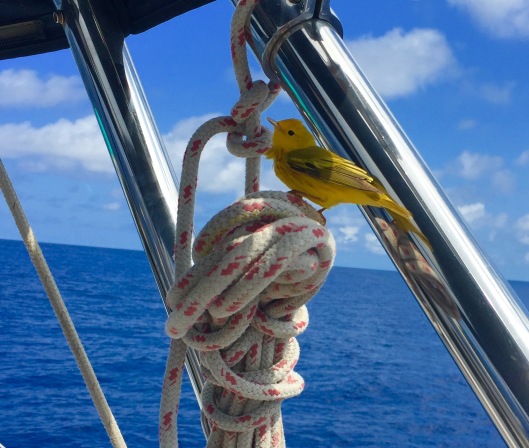 Our passenger for a while

Sereno will be staying here for a few weeks while we drive up to Pennsylvania for our nieces wedding.  Once back, we will continue our trek up the east coast of Florida to our summer stop in Brunswick, Georgia.  Later than planned, but we’ll get there.

Beautiful water, restaurants, bars, and a jaw dropping grocery store sums up the British territory of Grand Cayman.  Most people would associate jaw dropping with the beautiful water but after grocery shopping in Central America for the last few years, the store here was something to get excited about.  Gary and I ran around like two kids in a candy shop.  People must have thought we were nuts at our excitement at finding fresh berries, greens, cheese, basically all the things we have been craving but could not get in Central America.

We rented a car for four days because there isn’t much in the way of mass transportation here.  Definitely a tourist destination with the four or five cruise ships that arrive daily, but friendly people and English speaking.  Driving on the left is always a challenge and for the first time we had the steering wheel on the right side with many roundabouts to maneuver through.  By the third day I was no longer turning on the windshield wipers instead of the blinker but I still hated the roundabouts.  Give me traffic lights and stop signs any day! 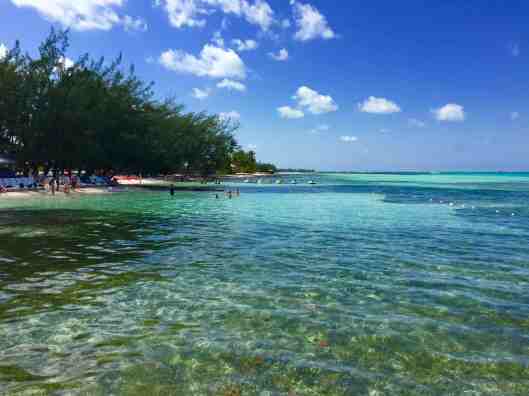 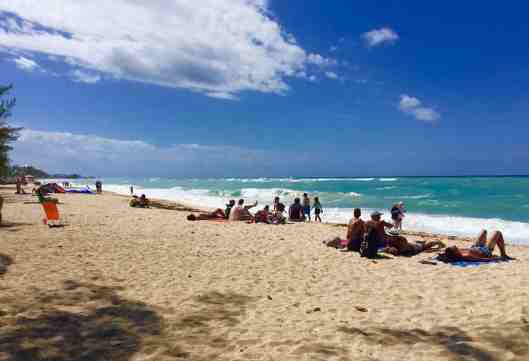 Seven Mile Beach Grand Cayman. The surf was up the day we visited. 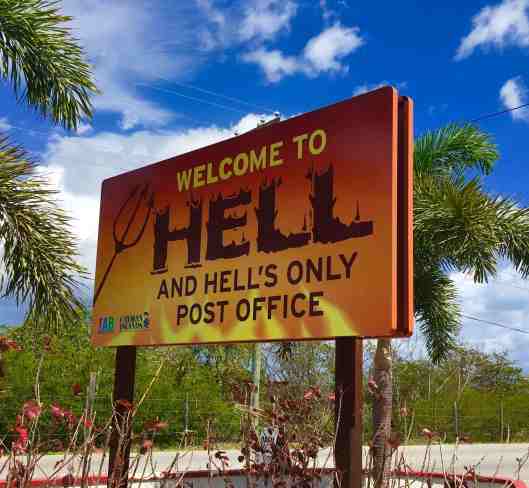 The town of Hell on Grand Cayman 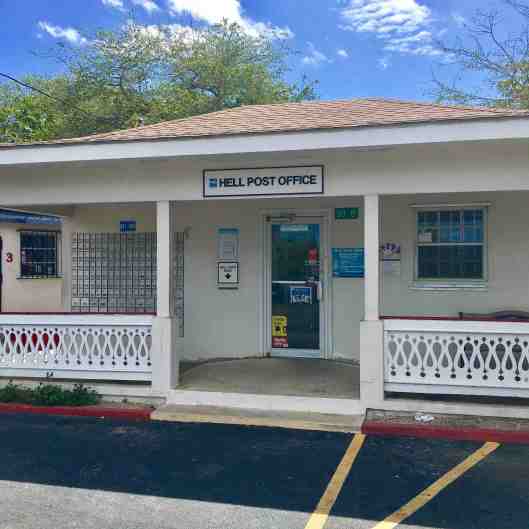 The US dollar is weak against the Cayman dollar so it is a bit pricey here, however, that has not stopped us from enjoying the many bars and restaurants.  So many choices but I think we are choosing well as all our meals have been great.  Our friend Ace from Red Frog has been here a few weeks and along with his crew Ryan and Eric they’ve given us some good suggestions.

We are currently waiting for a weather window for our four day passage to Key West.  Unfortunately Mother Nature is not yet cooperating.  We may have to take a detour two days away to Isla Mujeres, Mexico so we can keep moving north and find cheaper digs.  There are no protected anchorages here and while the marina is nice it is a bit pricey. 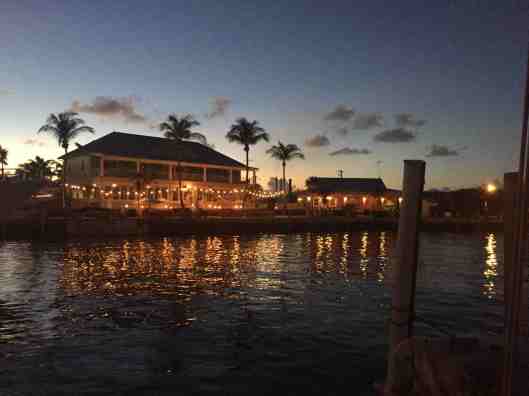 The view off our stern at Barcadere Marina 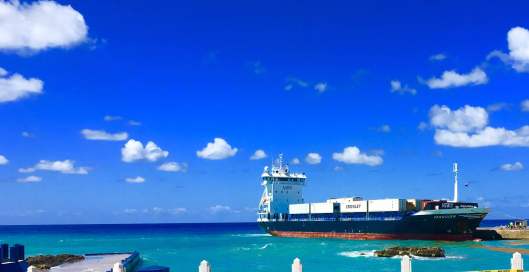 The waters off of George Town. No color was adjusted.

We spent a little over three weeks at anchor in San Andrés waiting for calm seas before moving further north to the Caymans.  We enjoyed the town after being in remote Dead oops Red Frog marina for seven months.  This was definitely a vacation destination for mainland Colombia as gringos made up about one percent of the population but we enjoyed it. 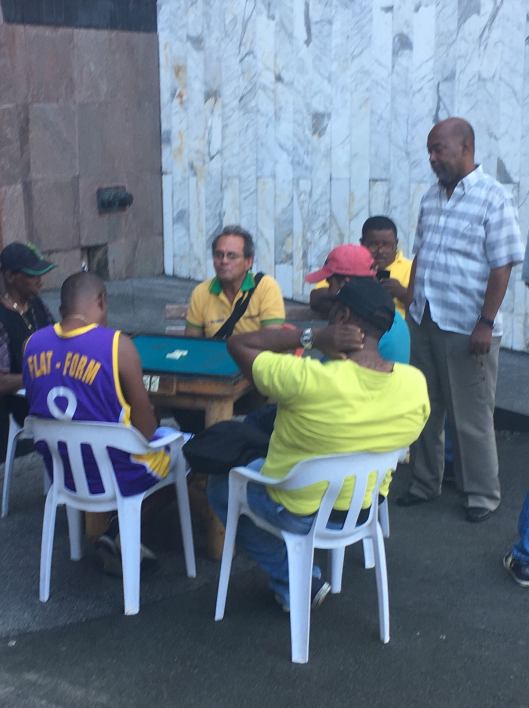 Taxi drivers playing dominoes while waiting for their next fare. 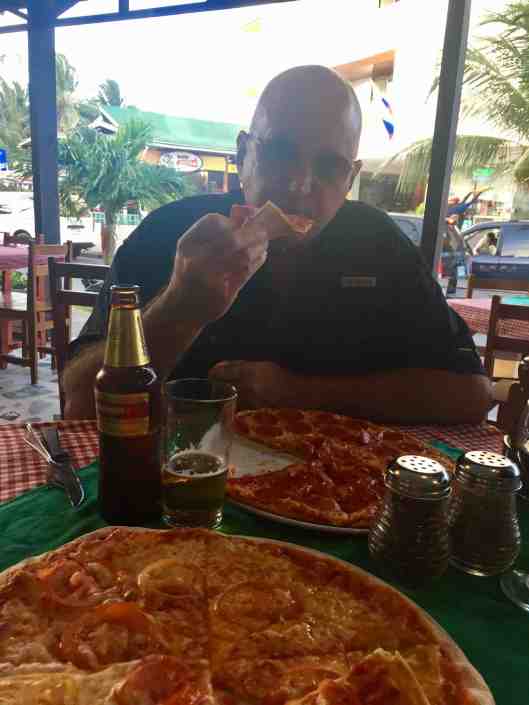 Our first pizza in months! 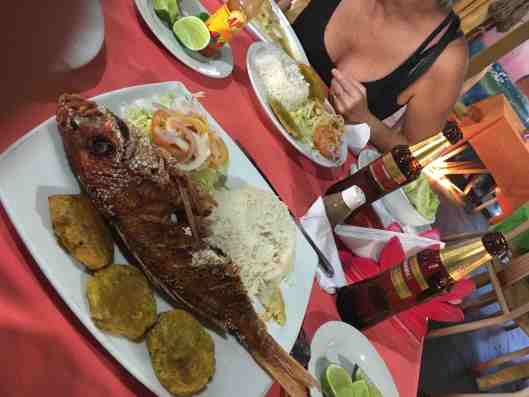 San Andrés is about 120 miles offshore and the winds certainly kick up here.  We were anchored off three wrecks, which made for some stressful times when the wind was up.

We were anchored next to these wrecks

We had a squall with 40 knot winds come through at night and we dragged our anchor.   With the engine running we held her steady until the squall passed.  We raised the anchor and at the time Gary noticed a bit of steel hanging from it.  He didn’t think it was any big deal so we lowered and reset the anchor and went back to bed.  The next morning we discovered we were too close to some mooring balls so we had to move.  We raised the anchor and Gary discovered we had a hunk of channel steel the length of the boat hooked to our anchor.  How the windlass pulled it up we have no idea.  Using the boat hook, Gary was able to get the steel off the anchor but now it was stuck to the boat hook.  Not able to pull it up any higher and with no way to get the boat hook off, Gary let go.  A few minutes later, the boat hook popped up to the surface but after several attempts we were not able to retrieve it.

Most boats just travel through San Andrés but we met Bill and Mary from Napa who have their 100 year old 51 foot steel hull sailboat at Nene’s marina.  Bills attraction to San Andrés is he considers this the best place for kite surfing.  Well we can’t agree more after experiencing the winds in this area for weeks!

A great weather window opened up for us to sail directly to the Caymans without needing to stop in Providencia.  We had several concerns with this passage.  The most important was incidences of piracy against sailboats along the Nicaragua coast and our second concern was the shallow banks.  With some advice from weather guru Chris Parker, we planned our route to stay 120 nm off Nicaragua and I’m happy to say all went well.  While we would have preferred a little more wind for sailing, with the exception of the first day the seas were calm and we were able to enjoy a cockpit shower somewhere in the middle of the central caribbean. 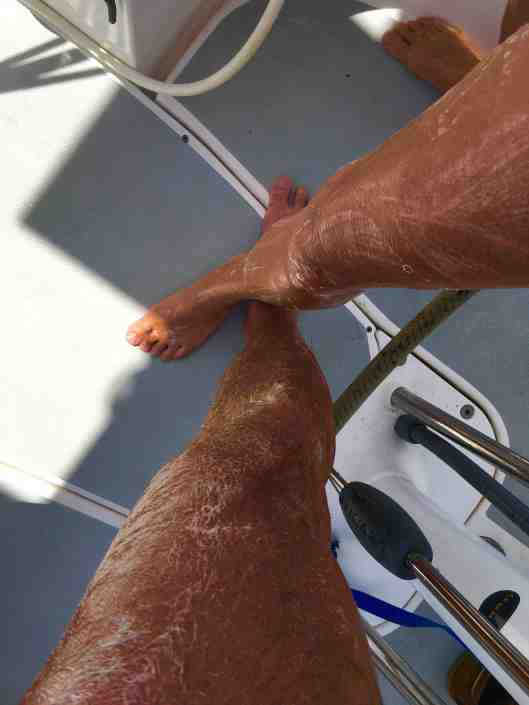 For us the clearance into the Caymans was a breeze.  We didn’t fit the profile for a search of the boat.  After clearing in we headed around the west coast of Grand Cayman and entered the shallow North Sound to Barcadere Marina.  Even following their waypoints it took us forever to get there because we went at a snails pace to make sure we would not ground out.  I’m so glad I remembered to record our track so we can take the exact same course out of here going faster. 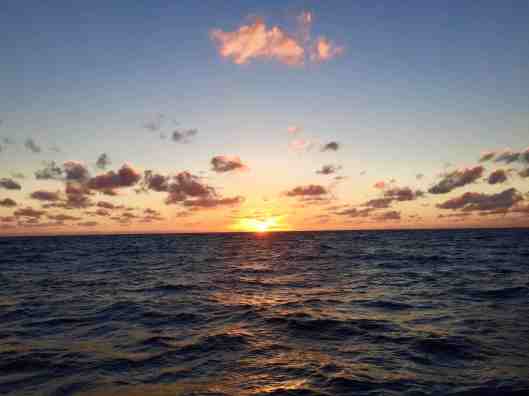 Sunrise on our way to Grand Cayman. 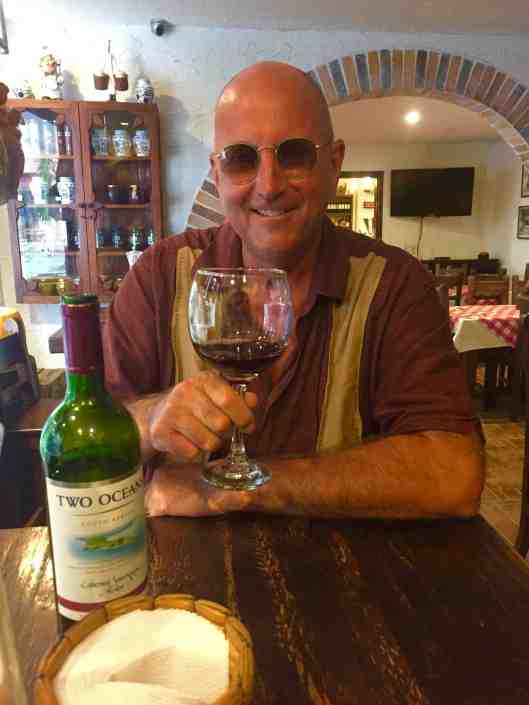 I did learn one thing on this passage.  If I spend three weeks in a windy and sometimes rolly anchorage right before departing, I will not get sea sick!