We loved Cartagena, Columbia. We could easily have spent a month there if only we could find an Airbnb in our budget. Great food, awesome latin music and some of the craziest drivers we have seen. And Gary just reminded me, the coffee. Latte, espresso! Gary and I are not fans of Starbucks bitter coffee but Columbian coffee, oh la la!

The hot spot for tourists is the walled city. Cartagena dates back to 1533 and was protected by a wall complete with canons and a drawbridge with moat. Most of the wall and canons are still there but the drawbridge and moat was replaced by a sidewalk. I guess having visitors requesting permission to enter would have been a bit unfriendly. What sets this wall apart from other walled cities we have seen is you can actually walk on top of it. 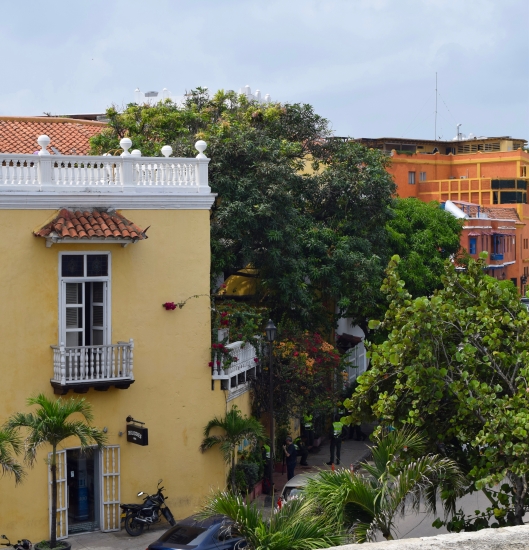 Walking along the wall gave us a good view of the old city within.

The walled city is very green. There are several parks and vines and flowers grow off the balconies and buildings. 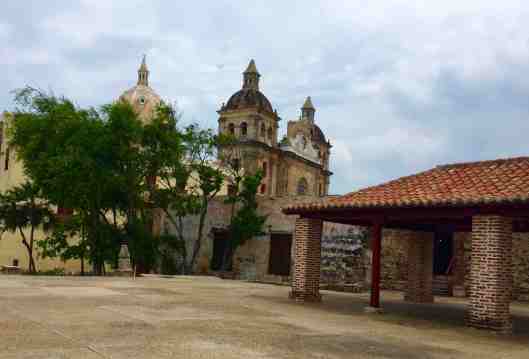 The church in the background is San Pedro Claver completed in the first half of the 18th century. 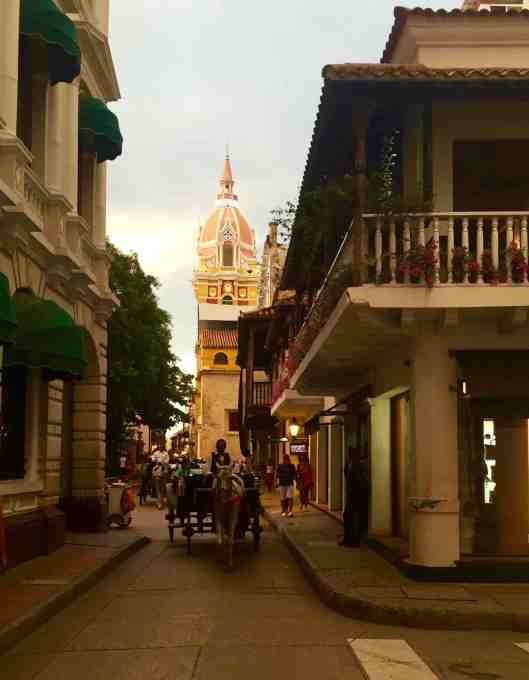 Walking the streets in the old city was a bit of a challenge. The sidewalks were narrow forcing you into the street. But then we were dodging not only cars but horse and carriages. Pedestrians DO NOT have the right-of-way anywhere in Cartagena. I almost got taken out by a police motorcycle cutting the inside of a blind corner right by our hotel! 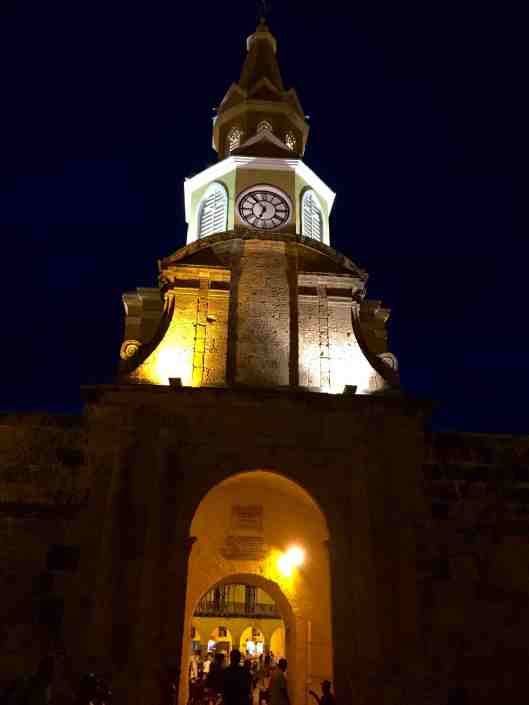 As with all latin cities we have visited, the locals come out every night and socialize. This was the local square in Getsemani where we stayed at the Casa Del Toro Hotel. A group of kids were playing a soccer game in front of the local church. We kept looking for Jack T. Colter and Joan Wilder amongst the crowd but they evaded us 🙂 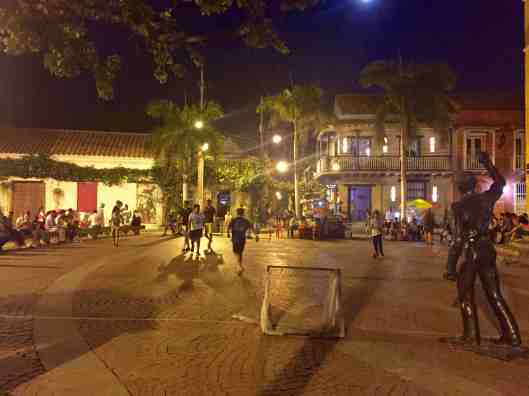 Lucky for Gary they had an ice cream shop where he got a fudge pop dipped in cherries. He did not share 😦

We really enjoyed the local scene in Getsemani. Would have loved to stay longer. Too many places to try, not enough time!

Hotel Casa Del Toro was a beautiful 5 room hotel built by two brothers from Ireland. They preserved the old and added in a modern hip feel. We were the only guests there and the staff was awesome and very friendly. The owner is hoping to make this a small intimate venue for music and dancing. The courtyard with pool, bar and surrounding rooms is ideal for this. He even installed a fog machine and disco lights. 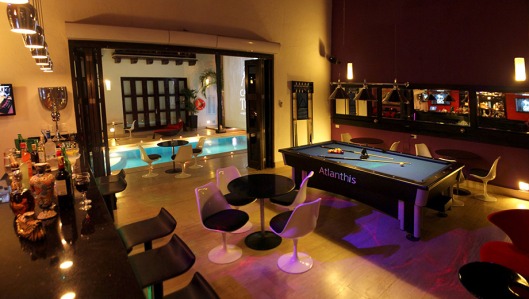 Health food on the go. Fast, fresh and cheap! We saw this on many street corners in all the Central American cities we visited and now here in South America. Better than a McDonald’s! 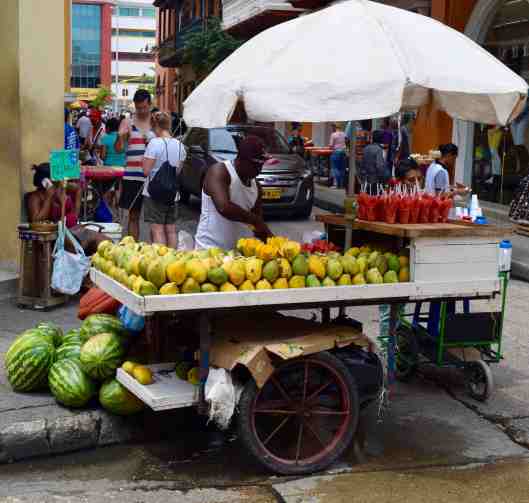 His speciality was watermelon and mangos. They all varied in what they had to offer.

These ladies sold fruit by The Clock Tower. They also walked the streets hoping to get tips for having their picture taken with you.

We enjoyed one bar in particular where they actually had a knowledgable and creative bartender.

Alquimico, like most places here, didn’t open until 6:00 pm. The jars you see are all the drink ingredients marinading.

We actually stayed up well past cruisers midnight (9:00 pm for our non sailing friends) to check out two clubs for some sassy latin music. The first was Donde Fidel in the old city where a local gentleman tried to teach me some salsa steps. Needless to say, I have to go on YouTube for lessons lol. The second was the historic Havana Club in Getsemani. This had a live eight piece band. No dancing here but we had a good time people watching with a front row seat to the band.

The Havana Club in Getsemani. 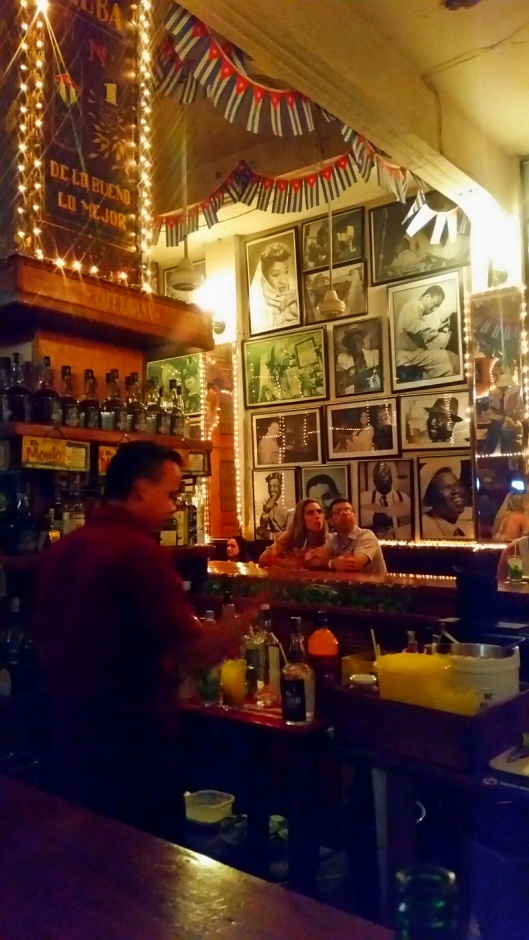 Inside the Havana Club.

The Havana Club only served Heineken beer. Columbia has their own beer so what the heck! 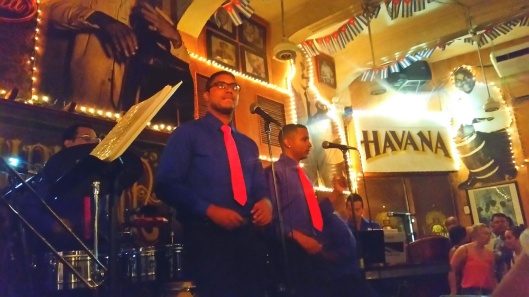 The Havana Club 8 piece band with 2 lead singers. All dressed in blue shirts and pink ties. No torn jeans and t-shirts here.

We ended up in the Clock Tower Pub for two hours waiting out a storm. Not a bad place to be stuck.

If you are thinking of visiting Cartagena, one thing to note. If you are a male and want to blend in, do not wear shorts day or night. Local men wear pants, jeans are okay. And certainly don’t wear your baseball cap. We have found this to be true throughout Panama as well.