Panama Canal, Transiting the panama canal in a sailboat

Sereno II is now in Caribbean waters! Thirty five hours after leaving the La Playita Marina on the Pacific side we arrived at Shelter Bay Marina on the Atlantic side. It sounds like a long time and for the crew it felt even longer. But what an experience we had. Sereno went through all six locks ‘center chamber’ which meant that we had a line handler positioned at the four corners of the boat each working a line attached to the lock wall.

The three locks the first day, where we were raised to lake level, took the longest to transit at two hours but we had the best canal advisor on board and an easy time. The advisor made sure our team on the boat and the canal team on the wall worked together to secure Sereno behind a ship and two tug boats. 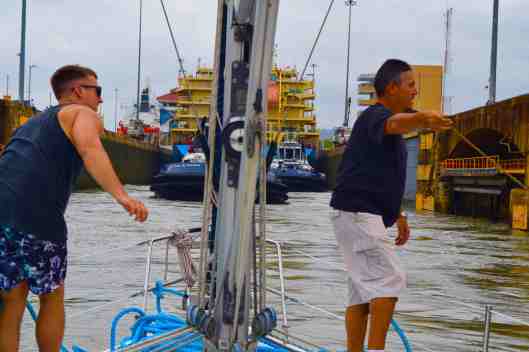 A Canal Advisor is on the boat with you from start to finish. Our first advisor, Roy, is catching the monkey fist that gets attached to our lines which are then hauled up to the canal line handlers on the lock wall. Off the bow you can see the ship and one tug in position. The second tug is moving into position. 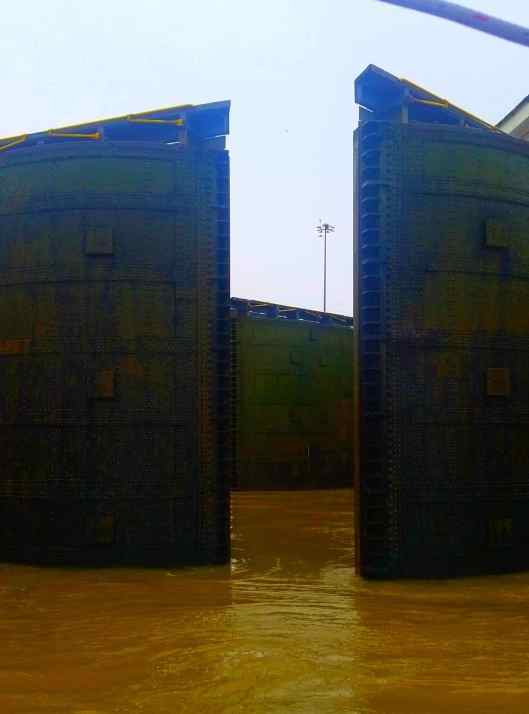 The gates are closing.

Sereno is secured inside the lock with two tug boats and a ship in front of us. Austin and Richard will bring in the blue lines on the bow as the water level rises. Nicki and Anita are on the stern lines. Gary is at the helm and I am helping out the gals on the stern.

We cleared the first three locks under clear skies but as we headed through the beautiful Culebria Cut and across Gatun Lake to our overnight anchorage, a storm came and drenched us. But it is rainy season so this was not a big surprise.

As we exited the third lock we passed under the Centennial Bridge. The blue boat and tugs were our lock mates.

Even under cloudy skies the Culebra Cut was beautiful.

Just before dark we reached our anchorage between the Gatun Locks and the entrance to the new locks, which are scheduled to open June 26. Boats taking two days are currently dropping anchor close to shore because the practice ship for the new canal that they are renting for 21 days at $1.5 million is using the mooring ball.

Our canal advisor for the Gatun Locks was scheduled to arrive around 9:30 am. At daybreak a sailboat was not able to retrieve their anchor and ended up cutting their chain leaving the anchor behind to make their canal appointment. Fearing the same fate for our anchor, we started to raise it at 9:00 am. Luckily we had no problems but as often happens our schedule got changed and our advisor did not show up until a little past 2:00 pm. So before we even got to the locks it was a long day slowly drifting around for 5 hours. But the weather was great until it was time to enter the locks. We motored over with rain and reached the outer gate with winds gusting over 20 knots. That’s when things started to get a little interesting.

This canal advisor had little experience with sailboats. Two things to note. We do not have bow thrusters on Sereno and when you are down locking (lowering from the lake to sea level) the ship is behind you. On his instruction we motored to the port wall to tie up until the gates opened but the wind gusts threatened to smash us into the concrete wall. With six of us holding her off, Gary was able to get us off the wall where we headed to the other side and found a rusted metal pipe to tie off to. With her secured and the ship inching closer behind us as well as a tug boat, we shook off the drama and once the gates opened we motored in.

Waiting on the wall to enter second set of locks.

We got through the first two locks but noticed that the pilot of the ship seemed to be a bit impatient. As we entered the third lock, the ship was coming up behind us before we were secured creating a 6 knot current. Gary had Sereno in neutral but we were moving right along. The canal line handlers on the starboard wall were not keeping up as I’m sure jogging is not in their job description. Without the line secured to the bollards to stop us and with the threat of running into the tug boat in front of us or worse yet the gates, Gary had to throw it in reverse to slow us down. With the port side secured and Austin holding the boat on his own via the bow port line to keep us from going any further forward, Sereno started to turn sideways threatening to smash our stern into the concrete wall. Let me say a sideways sailboat in a lock is not a good thing. Gary hit the throttle hard to bring us around and the canal line handler finally secured the starboard stern line to the bollard. Four of us then pulled on that line trying to bring the stern over to center but she wouldn’t budge until the ship stopped moving. All this drama earned us a ‘good catch’ from the tug boat driver, who went out of his way to not create a wake on our bow as he exited each lock. The canal pilot on the ship probably had a good laugh and the ships crew got some good videos.

This is the ship behind us. The two mules on the lock wall are guiding him into place behind us.

Yes the ship was that close! 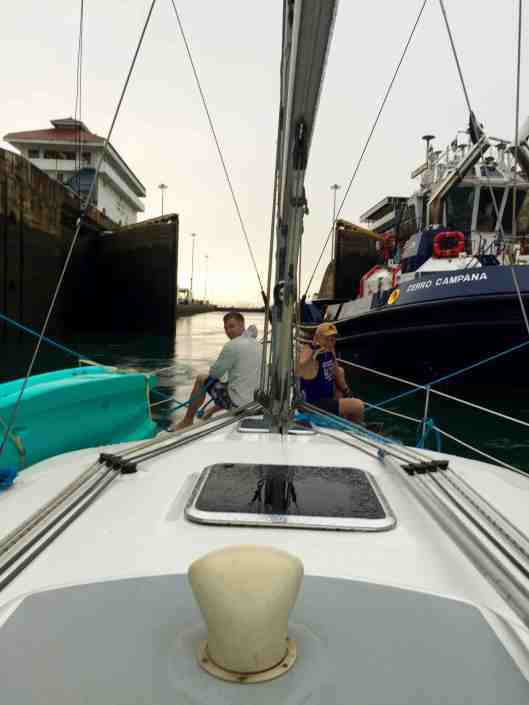 After one hour and ten minutes the final gates open!

I must say we had THE BEST line handlers on board Sereno. Austin, Nicki, Richard and Anita saved Sereno from harm and no one was injured. We can’t thank you all enough for flying to Panama to help us. It was really special to have family and friends on board. Most didn’t know they had a Panama Canal transit on their bucket list but they can now cross it off! 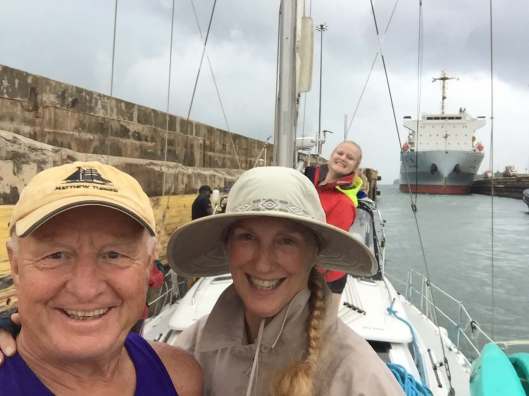 Richard and Anita selfie with Nicki stealing the shot!

I was the floater helping where needed.