We crossed into the waters off Guatemala at 1:05 pm on March 15th. We really love Mexico but it felt great to be moving on to a new country. We have plans to tour Guatemala but since the port on the Pacific side is not friendly to cruisers, we sailed a two night passage directly to Bahia del Sol in El Salvador. We had calm seas and light winds the entire time but we did get in some decent sailing without the motor running. A rare occurrence on the pacific coast.

Volcanos line the coast of Guatemala. We were 10 miles offshore trying to get away from the fishing panga’s (no luck there) so while we couldn’t see the outline of them, we did see the smoke and at night the glow.

Bahia del Sol is in an estuary behind a sand bar that requires a local pilot to help you navigate through safely. The pilot will do this only during high slack tide in daylight hours. We timed it so we would arrive well before the scheduled time of 9:40 am so we wouldn’t be late and miss the window. Missing the window means anchoring off a beach open to the pacific ocean well back of the surf but close enough that you have enough chain to hold. Not my idea of a fun night.

Bill and Jean organize the cruisers rally that we will be participating in. For every cruiser entering the bar during the year, Bill comes out with the pilot and relays his instructions to us over the VHF radio. While 99.9% make it safely, the day before an underpowered sailboat sunk (the sole occupant is okay). So when the surf is up as it was on this day, there are risks. At 9:40 with Sereno just a few yards from the surf and the pilot boat right in front of us we put the peddle to the metal and proceed full steam ahead.

I think pictures speak a thousand words so here is our bar adventure. 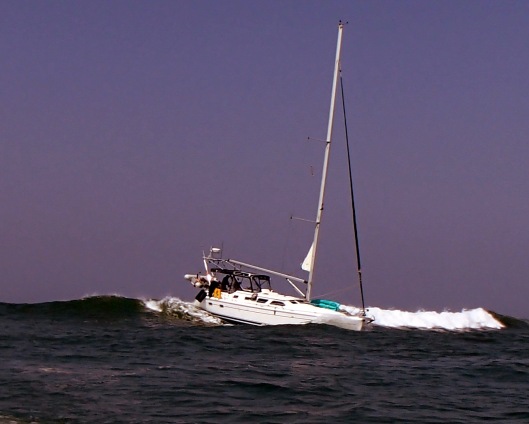 A wave caught our stern pushing our bow to port and Gary temporarily lost steering.

Here we are in a short lull but we had gone way too far to the left heading for shallows. The pilot had us make a sharp turn to starboard to avoid going aground. We got hit broadside by a wave knocking us over about 40 degrees. But Sereno knew what to do and she bobbed back up and Gary quickly brought us around perpendicular to the waves again in time for the next set. All was good and we motored into the estuary.

I can’t say enough about Bill and the pilot for their directions in getting us safely over.  They are in a panga riding through the surf with a boat coming at them. Yikes! And of course a big thank you to my Captain for piloting us through and keeping us safe.

After a two night passage and a drama filled entry, we decided to relax in the cockpit taking in the scenery.  That is until Gary said ‘Now I know how Tom Hanks felt in Cast Away’.  Oh yea, we have to go back over the bar to leave!

1 thought on “Passage to El Salvador for the Cruisers Rally”