We had the good fortune to have guests on board Sereno II this week. Our Baha Ha Ha crew member, chef and fisherman, Richard joined us along with his lovely wife Anita. Having left the San Francisco Bay area, they arrived on a hot day and not quite dressed for our tropical weather. In short order they changed clothes, had a drink in hand and began to slip into Mexico time. We have been in Banderas Bay for a little over two months. That doesn’t qualify us as experts but we were able to act as tour guides and show them both what we had discovered so far. We spent a full day out on the bay exploring the south side while Richard was trolling two fishing lines. Our mouths were watering for a tuna but sadly it was not to be. Not a bite or even seaweed for that matter, though a few birds were interested. But the day ended very well indeed. The wind picked up and after a great sail back we anchored out for a swim and happy hour before heading back to the marina where Richard prepared us a wonderful pasta dish.

Now for anyone who knows Richard, the one thing you do know is that he is not satisfied coming back empty handed from a fishing trip. So early one morning Richard and Gary hired a panga to take them to the spots that only panga fisherman know about. That means an hour away just outside the bay. Within 15 minutes Richard caught his first fish but for the next two hours nothing. They started to head back in and that is when the action started. A total of seven fish consisting of mahi mahi, dorado, and a toro were caught. They told a story of a big one getting away from Gary just before it reached the boat. Our freezer is full of fish and the ceviche was excellent!

This was a Toro. Puts up a strong fight and they were told is not good for eating

While flying across the bay in a small boat to fish for hours, witnessing the blood and gore of the kill and watching men pee off the side of the boat does sound wonderful, Anita and I had other plans. Shopping and lunch in Sayulita! Living on a small boat means window shopping only for me but a nice lunch was had right on the beach.

We said our goodbyes as they headed off to spend the night in Puerto Vallarta to celebrate Anita’s birthday. It was wonderful meeting Anita and we wish them the best in their future travels. 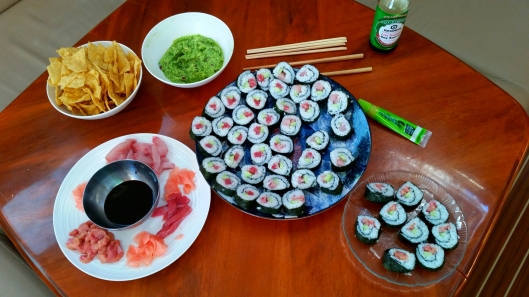 Sashimi and sushi. What a feast!

Enough with the pictures. We want to eat! 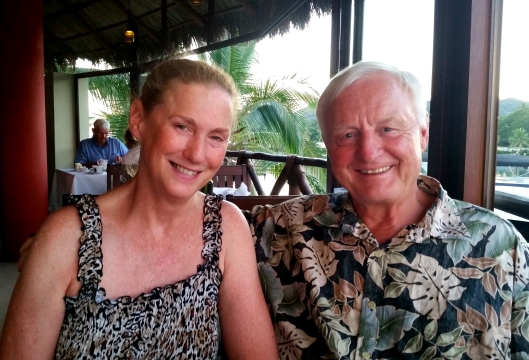 Anita and Richard. We enjoyed our last dinner together overlooking Marina La Cruz