With the Baja Ha Ha over it was time for Greg to leave.  Since Gary, Richard and I were continuing on to Puerto Vallarta, we decided to drop Greg off at the fuel dock so we could get diesel and be on our way.  “then as suddenly as he’d come into our lives… he was gone…” (for you Captain Ron fans).  Or so we thought.

We were halfway out of the bay when Gary came up in the cockpit to ask Richard if his cell phone was charging on the nav desk.  Yup, Greg forgot his cell phone!  I knew he really wanted to come with us 🙂  We did a quick u-turn and made some contacts on the radio.   Greg caught his ‘life line’ as we did a ‘float by’.  We had a few laughs at his expense since the phone was in his hands looking for a signal any time land was in sight!

So back through the busy marina and out into the bay for our second attempt at leaving.  There was a cruise ship anchored in the middle of the bay and just as we were passing it the engine started to sputter.  Since we had just taken on fuel, Gary decided the fuel filter needed changing.  So up with the sails and off with the engine while he quickly changed the filter.  We fired the engine back up, pointed ourselves in the right direction then the engine dies completely. Back to the engine Gary goes to troubleshoot the problem while Richard and I slowly sail Sereno II back and forth across the bay while watching the San Francisco 49r game on the big screen TV on the top of the cruise ship.

Under 600 hours and clean as a whistle. What could be wrong with Betty Lou? Just a little dirty fuel, no worries!

It turned out there was a blockage in the fuel line.  Gary gave the engine a blow job and cleared the blockage.  We started her back up and for the third time that day we headed out to sea only this time we made it.  Our destination was Marina Puerto Los Cabos in San Jose three hours away to wait out some weather.

As the Captain, Gary got the honors.

From San Jose we sailed 48 hours to Bay of Banderas arriving in time for breakfast.  Our first stop was Marina Riviera Nayarit or better known as La Cruz Marina.  The marina is located in a small fishing village north of Puerto Vallarta.  While listening to music in a bar one night I ran into Lynn Morse who I worked with for many years.  What a small world.  And without all those delays, we probably would not have been at the same bar on the same night. 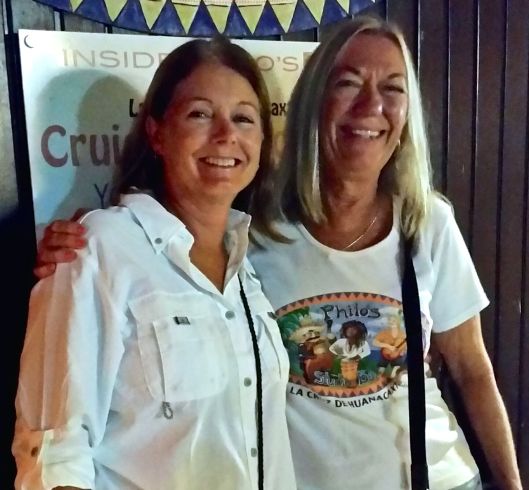 ‘Of all the gin joints in all the towns in all the world, she walks into mine’ (Casablanca)

Our next stop was Paradise Village Marina just outside of Puerto Vallarta.  A beach with drink service, three pools, a spa and small shopping mall.  What more could you ask for?  It was also time to say goodbye to Richard.  It was an awesome trip. Gary and I agree, Richard and Greg were the perfect crew members!

Good food, a large Margarita made for a very happy sailor! Richard in La Cruz