I got wondering the other day about my shoes. Boat shoes to be exact. I was thinking that boat shoes have been part of my attire for over 30 years. Even when we didn’t own a boat 90 percent of the time I had boat shoes on my feet. Not just any boat shoe it has to be Sperry Top-Sider boat shoes. Just the regular old brown one’s nothing fancy. 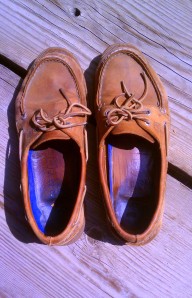 Sperry does make many styles now and they’re very nice but I just stick with the plain old brown Sperry’s. I think there is something very comforting about putting your feet into something you instantly recognize in the morning don’t you? Anyway a month or so ago I was over at my friend Bob’s business and he noticed that we both were wearing the same Sperry Top-Siders. The plain   brown one’s of course. Turns out that he wears them all the time too and to my knowledge Bob has never even owned a boat. We also simultaneously realized that this odd behavior started about the same time that we each got married. Bob has 3 kids and I have 1. Bob is exactly the same age as me lives in the same town and we both like baseball. Not the stuff great mysteries are made of but interesting just the same don’t you think? Men, boat shoes and marriage, we think we’re on to something. Now my son has recently started wearing boat shoes but not the plain brown one’s. He certanly doesn’t wear them all the time and he’s not married. Cindy also wears them occasionally and again not the plain brown one’s, plus she’s a woman so it doesn’t count. So for the purpose of this discussion we’ll leave them out of it. Although Cindy is married…? Anyway this got me thinking. I wonder if there is a connection between marriage, men and Sperry Top-Siders. Perhaps this is a DNA thing. a Sperry virus that attacks the male Y chromosome entangling it with the marriage gene. This would transend all past knowledge of human footwear. There is a marriage gene isn’t there?  I wonder if Sperry is aware of this fascinating quality that their boat shoes possess. The plain brown one’s of course.