Labor day weekend and Cindy and I were back at it on the Carquinez Straits. It was a perfect day, sunny and light winds about 10 to 14 knots. That is light wind for the Straits. Anyway we had been watching 3 very large racing style catamarans (cats) come in from the west across San Pablo Bay. We had never seen this type of boat here before so we were interested. These cats were beautiful very big, very expensive and corporate sponsored. Cindy was piloting Sereno on a upwind tack when the lead cat jibed right at us about 200 yards off our bow. They were moving fast, very fast and now up on one hull. It looked at first that they wanted to pass us on our Port side but then steered straight at us. The cat was closing faster and I know they could see us because they were close enough now for me to see their eyes and hear one of them yelling PORT PORT to his Captain. Cindy threw Sereno’s wheel over hard to our port side and as they passed us (close enough to shake hands) were apologizing with what sounded suspiciously like an Aussie accent.   Aussie driver I guess!   Funny it seems now and gave us lots of spirited conversation at dinner.  Pictured is the second cat. I didn’t have time to get a shot of the first one. 🙂 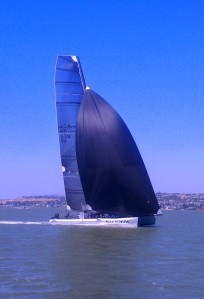 We sailed a couple more hours and were making our way back to the marina when we found ourselves in the middle of a sailboat race. About 75 boats and all heading down the Straits. we realized just in time that the race was ending right in front of our marina. Time for some quick action. We threw the sails down and put Serenos power plant in high gear sneaking into our marina just in front of the lead boat. Most of those racers were going to spend the night here courtesy of our Yacht Club. Well I think the Harbor Master thought we may have won the race since we were leading the flotilla in. He yelled to us over his bullhorn and asked us if we needed a slip for the night. No thanks we already have one we replied. Pretty funny and a perfect ending to a bizarre day.