“The longer I live, the more I realize the impact of attitude on life. Attitude, to me, is more important than facts. It is more important than the past, than education, than money, than circumstances, than failures, than successes, than what other people think or say or do. It is more important than appearance, giftedness or skill. It will make or break a company… a church… a home. The remarkable thing is we have a choice every day regarding the attitude we will embrace for that day. We cannot change our past… we cannot change the fact that people will act in a certain way. We cannot change the inevitable. The only thing we can do is play on the one string we have, and that is our attitude… I am convinced that life is 10% what happens to me and 90% how I react to it. And so it is with you… we are in charge of our attitudes.”

We call San Pablo Bay “The Washing Machine” because it has a nasty reputation for being..well ……..Nasty!    This day however We enjoyed calm winds and mostly flat seas. Here is a short video from that beautiful Autumn day.      G.

Went down to the marina today Sereno is going to get a new toilet and a galvonic iscolator. The existing toilet seems to be the original and the valves are pretty worn out. I must say this was the easiest plumbing job I’ve ever done. Plumbing work usually requires a couple of trips to the hardware store for me anyway. Had the old one out and the new throne installed in just under 45 minutes. Well done pat on the back!

Now for the cleaner exercise of the day. A galvonic iscolator separates Sereno from electrical problems with other boats who are also plugged into shore power at the marina. Since I am cheap and didn’t want to spend $200-$300 on a commercially available iscolator I designed and built my own. Having a background in this kind of thing saved me some big bucks today.   G. 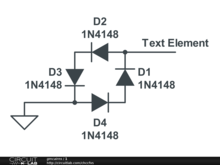 It was the summer of 1998 and we were in the British Virgin Islands with our 6 year old son, Austin, when we were introduced to Silmaril a beautiful 41 foot sailboat.  We hired Captain Paul to take us on a 4 hour sailing and snorkeling adventure through the islands.

I remember that day very well.  Typically Captain Paul’s wife accompanied him but she had to stay behind for a function her daughter needed to attend.  So we waved goodbye to them at the dock.  In her place crewing with Captain Paul was a teenage boy from Africa named Craig.  His stories and experiences I will not forget.  His family lived on their sailboat and traveled the world.  On one particular trip as they were coming around Africa a large wave swept his father off the boat.  Seconds later another wave dropped him right back on the boat.   Someone was surely looking over their family on that day.

We had a wonderful sail through the islands and went snorkeling in a cave.  Captain Paul was sure to point out all the islands Black Beard and other pirates lived on, which thrilled Austin since he was big into pirates at the time.  Austin even got to pilot the boat!

When Austin started 1st grade a few months later the teacher asked him a bunch of questions so she could get to know him.  He talked of boats and pirates, the normal things.  When I picked him up that night the teacher pulled me aside and said you know I asked Austin what his favorite drink was and he replied, rum.   I couldn’t help but chuckle and explained that we had just been in the BVI where pirates are known to like their rum.  She smiled and then went on to say; when I told Austin that probably wasn’t an appropriate answer he replied Margaritas.  What could I say?  Mom and Dad are known to like their margaritas!  I just smiled and said kids will be kids.  She didn’t call child protective services anyway 🙂

To this day we still talk about that sailboat ride and the hospitality of Captain Paul.  It was the highlight of our trip and made all the more special in the way Captain Paul went out of his way to make it memorable.  It is with great sadness that I must say we just learned of Captain Paul’s passing last October.   I’m sure he touched thousands of lives with the unique experience he provided aboard Silmaril.  I am happy to say that his wife Judy and daughter Robyn continue to offer sailing adventures aboard Silmaril http://www.charteraboat.com/silmaril/  Fair winds – Cindy

The sugar on your dinner table comes from a factory we sail by every weekend.      G.

From Wikipedia, the free encyclopedia

California and Hawaiian Sugar Company (C&H) was founded in 1906 and operated from 1921 to 1993 as an agricultural cooperative marketing association owned by the member sugar companies in Hawaii. Its headquarters are in Crockett in unincorporated Contra Costa County, California.[1][2] In 1993, the member companies sold their interests in C&H to Alexander & Baldwin in Honolulu, and the refining company’s status changed from a cooperative to a corporation. Alexander & Baldwin subsequently sold its majority share to an investment group in 1998, retaining a 40% common stock interest in the recapitalized company. In 2005, the common stock shares were acquired by American Sugar Refining (ASR, better known as Domino Sugar), a company owned by Florida Crystals and the Sugar Cane Growers Cooperative of Florida. Florida Crystals is a privately held company that is part of FLO-SUN, a sugar empire of the Fanjul family whose origins trace to Spanish-Cuban sugar plantations of the early 19th century.

The C&H brand is one of the leading sugar brands in the company’s markets (where it is not the de facto leader), largely due to advertisements stressing their exclusive use of cane sugar, believed by some to be superior to sugar from the sugar beet.[3]

C&H’s primary market is west of the Mississippi River in the United States, although some sugar is sold in various east coast stores. A number of high-profile restaurants, bakeries and hotels have C&H sugar shipped to them where it is not available through local distribution channels. More than 70 types, grades, and package sizes are sold within the two major groupings of grocery and industrial products. About 700,000 short tons (640,000 metric tons) of sugar per year are processed.[4] The refinery at Crockett, California, refines, packages, and markets all of the output from Hawaii’s sugar factories, such as the remaining factory of Alexander & Baldwin, the Hawaiian Commercial & Sugar Company on Maui.

I got wondering the other day about my shoes. Boat shoes to be exact. I was thinking that boat shoes have been part of my attire for over 30 years. Even when we didn’t own a boat 90 percent of the time I had boat shoes on my feet. Not just any boat shoe it has to be Sperry Top-Sider boat shoes. Just the regular old brown one’s nothing fancy.

Sperry does make many styles now and they’re very nice but I just stick with the plain old brown Sperry’s. I think there is something very comforting about putting your feet into something you instantly recognize in the morning don’t you? Anyway a month or so ago I was over at my friend Bob’s business and he noticed that we both were wearing the same Sperry Top-Siders. The plain   brown one’s of course. Turns out that he wears them all the time too and to my knowledge Bob has never even owned a boat. We also simultaneously realized that this odd behavior started about the same time that we each got married. Bob has 3 kids and I have 1. Bob is exactly the same age as me lives in the same town and we both like baseball. Not the stuff great mysteries are made of but interesting just the same don’t you think? Men, boat shoes and marriage, we think we’re on to something. Now my son has recently started wearing boat shoes but not the plain brown one’s. He certanly doesn’t wear them all the time and he’s not married. Cindy also wears them occasionally and again not the plain brown one’s, plus she’s a woman so it doesn’t count. So for the purpose of this discussion we’ll leave them out of it. Although Cindy is married…? Anyway this got me thinking. I wonder if there is a connection between marriage, men and Sperry Top-Siders. Perhaps this is a DNA thing. a Sperry virus that attacks the male Y chromosome entangling it with the marriage gene. This would transend all past knowledge of human footwear. There is a marriage gene isn’t there?  I wonder if Sperry is aware of this fascinating quality that their boat shoes possess. The plain brown one’s of course.

On board, I’m the captain
So climb aboard
We’ll search for tomorrow on every shore

Labor day weekend and Cindy and I were back at it on the Carquinez Straits. It was a perfect day, sunny and light winds about 10 to 14 knots. That is light wind for the Straits. Anyway we had been watching 3 very large racing style catamarans (cats) come in from the west across San Pablo Bay. We had never seen this type of boat here before so we were interested. These cats were beautiful very big, very expensive and corporate sponsored. Cindy was piloting Sereno on a upwind tack when the lead cat jibed right at us about 200 yards off our bow. They were moving fast, very fast and now up on one hull. It looked at first that they wanted to pass us on our Port side but then steered straight at us. The cat was closing faster and I know they could see us because they were close enough now for me to see their eyes and hear one of them yelling PORT PORT to his Captain. Cindy threw Sereno’s wheel over hard to our port side and as they passed us (close enough to shake hands) were apologizing with what sounded suspiciously like an Aussie accent.   Aussie driver I guess!   Funny it seems now and gave us lots of spirited conversation at dinner.  Pictured is the second cat. I didn’t have time to get a shot of the first one. 🙂

We sailed a couple more hours and were making our way back to the marina when we found ourselves in the middle of a sailboat race. About 75 boats and all heading down the Straits. we realized just in time that the race was ending right in front of our marina. Time for some quick action. We threw the sails down and put Serenos power plant in high gear sneaking into our marina just in front of the lead boat. Most of those racers were going to spend the night here courtesy of our Yacht Club. Well I think the Harbor Master thought we may have won the race since we were leading the flotilla in. He yelled to us over his bullhorn and asked us if we needed a slip for the night. No thanks we already have one we replied. Pretty funny and a perfect ending to a bizarre day.

Finding the fun in life and poking fun at ourselves is what keeps us sane.